This guide will present a very simplistic view of what a capacitor is and how it can be used in electronics. Capacitors have lots of different uses in electronics not presented here, but this guide should be enough to get you using them.

In general, a capacitor can be thought of as a tiny battery. They can provide power to your circuit when your battery can not, and help to stabilize your circuits operation. Most circuits can benefit from the addition of capacitors, as discussed at the end of this guide.

Capacitors come in 2 varieties: polarized and non-polarized. Recall that resistors are non-polarized, meaning it doesn’t matter which way you hook a resistor up to a circuit, it will work either way. Batteries, on the other hand, are polarized because they have a + (positive) and – (negative) terminal. You have to be sure that you hook batteries up the way that they are intended.

Some capacitors are the same as batteries and some are not. You have to be sure that you know whether your capacitors are polarized or non-polarized. We will talk about each of them separately.

Above is the symbol for a polarized capacitor. In the picture next to the schematic we have some large, electrolytic capacitors. You may notice that the legs are marked with a (-) sign to indicate which side of the capacitor goes to GND.

What Capacitors are Used For

In an electronics project, you may have some sensitive components like microprocessors, and at the same time you might have some big, power hungry motors. If the motors and the microprocessors are running off of the same battery then you might get some unexpected results as the motors turn on and off. Take a look at this example.

This motor is going to ruin this Very Sensitive Device’s day.

Here we have a motor and a very sensitive device hooked up to the same battery. When motors run they draw lots of power from the battery and can affect the batteries voltage. This is because batteries are far from ideal and are actually not very good at maintaining their advertised voltage.

Some very sensitive devices can not tolerate having their battery voltage changed and will fail under these conditions. The solution is to add some capacitors to help support the battery during moments of high demand by the motor. It looks like this.

This looks much better.

When you use capacitors in this way, they are referred to as Bulk Capacitors because they provide a bulk of energy when the motor demands it. It is also common to call this a filter capacitor or a smoothing capacitor because it filters, or smoothes the power supply to the sensitive device.

However, in real life the location of the capacitor can have a significant affect on the performance of the circuit. In general, bulk capacitors are placed near the power supply. In this case, that would be near the battery. In a multi circuit board design, you can put bulk capacitors on each board where the power is connected to the board.

Working with capacitors is a bit of an art. Bulk capacitors are not like resistors, in that there will not always be an exact value that works for a given circuit. With resistors you can do some math, figure out the value you need, and then find that value of resistor and use it. With bulk capacitors you have to take some guesses from prior experience, and try a few values to see what works best.

In the circuit above, it would be a good idea to start with a 100uF (that’s 100 microFarad) capacitor. In the capacitor world, 100uF is pretty big. You might also want to a try 10uF and 1uF. Better yet, read below how to double up your values.

In most circuits, the designers use multiple bulk capacitors to try to really make sure that their sensitive devices are not damaged by the power hungry motors. Different value capacitors react differently to different amounts of noise. Since you can not reliably predict the amount or kind of noise a motor will make, its a good idea to be prepared for all kinds of noise. The beauty of bulk capacitors is that it can never hurt to add more. Here is an example of adding various bulk capacitors to the above circuit.

So far, everything we have talked about has been using large, polarized capacitors. Now we are going to talk about the most common use for non-polarized capacitors. When you have sensitive devices on a circuit board, it is common to put a decoupling capacitor next to each device. It gets wired exactly the same as a bulk capacitor, so you are already familiar with the circuit. The difference is two fold:

Decoupling capacitors help all of the noise on the + power rail disappear by allowing it to flow to ground through the capacitor instead of through the device that you are trying to protect. This is due to the filtering property of capacitors, which is an advanced topic.

Lets take a look at the above circuit with a decoupling capacitor added.

This very sensitive device will appreciate the .001uF decoupling capacitor and the 3 bulk capacitors.

Here we have added yet another capacitor to the circuit. This time it is non-polarized and very small, weighing in at only .001uF. Notice that we have put it close to the device that it is protecting. This is a reminder that in the real world circuit we are going to want to do the same thing.

If you have multiple sensitive devices to protect, you put multiple decoupling capacitors in the circuit, one for each device. Yet you still only have one set of bulking capacitors near the power supply.

Lets use a real life circuit board to see if you can pick out the bulk capacitors and the decoupling capacitors. Use these rules to help you out.

We have marked the power connecter in red, and drawn a red square around 3 of the sensitive devices on this board. 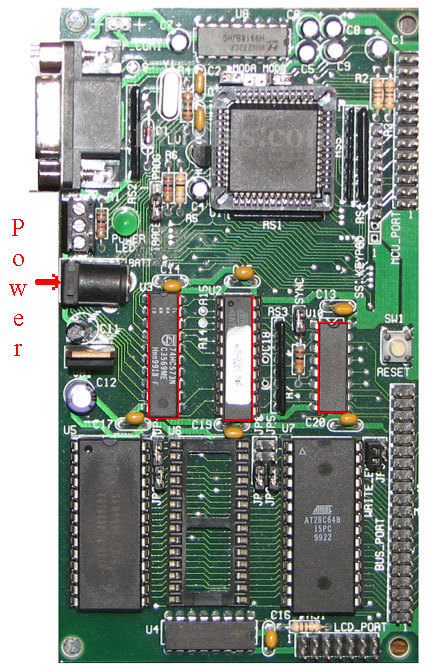 Try to find the bulk capacitors and the decoupling capacitors.

Don’t cheat. Try to find them on your own. You should find 2 bulk capacitors and 9 decoupling capacitors. When you are done studying the board and think you have identified them, go to the next page. 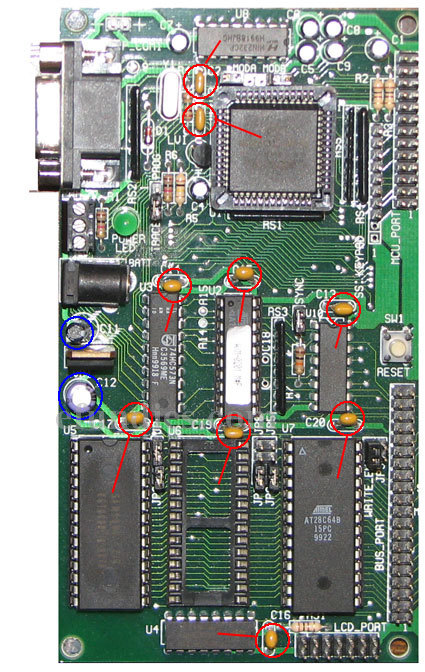 That’s a lot of decoupling capacitors.

Notice that this board designer put a decoupling capacitor next to each black chip. This is very good practice. They also put in two bulk capacitors near the power connector; a small one and a large one. This is a good example of how to use capacitors in a design. You should consider this a minimum amount of capacitors in your designs.