When you have two resistors in a circuit and they are tied together so that current flows through one of them and then the other, they are said to be in series.

The resistors R1 and R2 are in series. The current I flows through both of them.

Notice in the schematic above that the resistors are in line, one after the other. Since resistors work by reducing the current that flows in a circuit, it follows that two resistors reduce the current flowing in the circuit even more.

Think of light filters stacked up in a row. The first filter cuts the light by a certain percentage. That reduced light hits the second filter, which reduces the total light by an additional percentage.

Likewise, when current goes through two resistors in series, the total current is reduced because the total resistance has gone up.

It turns out that when two resistors are hooked up in series, they present a combined resistance that is equal to their two values added together.

When you see two resistors in series, you can add the values together and replace them with a single resistor. The new resistors value is the sum of the previous two resistors.

When analyzing circuits it is usually easier to reduce the circuit to a simpler circuit in order to to make the math easier. The reduced circuit is mathematically identical to the original circuit. You then use the reduced circuit to answer any questions you have about the original circuit. When you encounter two resistors in series, you can reduce them to one resistor by adding their values together and replacing them with a new resistor that has the value you obtained.

In the left schematic above we have two resistors in series. In the right picture we have reduced them to a single, equivalent resistor. Now we can use Ohms Law to figure out how much current is flowing through both circuits, since they are mathematically identical.

Lets start with Ohms Law in its standard form.

A more useful form for this problem is when it is already solved for I (current).

Now that we know that 0.10 Amps of current are flowing through the circuit, we can go back to our original circuit and label I (current) with the new value. 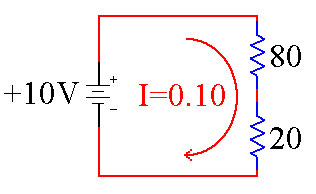 By using circuit reduction of resistors we have made the math of solving this circuit much easier.

As current flows through a resistor it creates a voltage drop. This means that the voltage drops from a high number to a lower number. You can calculate the voltage drop across each resistor by using Ohms Law. We’ll use the same example as before.

We will use the basic form of Ohms Law to determine the voltage dropped by each resistor.

We have applied Ohms Law to both R1 and R2 to determine how much voltage is dropped by each. From the math, R1 drops 8.0 volts while R2 drops 2.0 volts.

Now think about point A (in green) for a second. The voltage at that point is +10V because it is connected directly to the +10 Volt battery. Resistor R1 is going to drop 8.0 volts as current I flows through it. That means that point B (in green) is 10 – 8, or 2 volts.

We have 2 volts at point B. Resistor R2 is going to drop 2.0 volts as current I flows through it, leaving us with 2 – 2 = 0 volts at point C. This makes sense, too, because point C is the negative terminal of the battery, which we tend to always associate with 0 volts.

It turns out that the voltage dropped by R1 + R2 will always add up to the value of the battery.

This circuit is so useful in electronics that it has its own name, a Voltage Divider. A voltage divider is used to divide a large voltage into smaller voltages. When designing a voltage divider, you do not have to do all of the math that we did above, there is a short cut. First we have to name a couple of points appropriately.

The point of a voltage divider is to create a new Vout based on a given Vin. Here is the generic circuit. 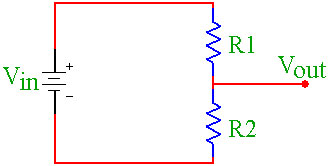 We can generalize the solution for the value of Vout using the following equation.

We start by plugging in the values we know.

The answer of 2 Volts is exactly the same as the answer we got by using Ohms Law above. In fact, the Voltage Divider equation is created by using algegra to rearrange the equations on the previous page into one big equation. The answers will always be the same. You can use which ever method you like better.

Resistors in series will show up many times in electronics. When resistors are in series, the current through both resistors is the same. Each resistor will drop voltage as the current passes through it. We use this voltage drop to create new voltages with a circuit known as a voltage divider. With these techniques you are able to create any voltage that you need in your project, as long as Vout is less than Vin.