We need to introduce a new symbol because it is used extensively in electronics.

The symbol for an ohm is Ω.

Whenever you see Ω written down, you can say "ohm" or "ohms" if plural.

Here is the schematic symbol for a resistor, and some real life examples.

Resistors come in many different values from 1 Ohm to 10 million Ohms. Since it is very inconvenient to write 10,000,000 out, it is common to express the values of resistors in Engineering Notation. While engineering notation is a broad concept, you really only need to know 2 terms when dealing with resistors.

Likewise, 5M is the same as this.

Some common resistor values are listed in the table below. You should be familiar with these values because you will see them a lot in electronics.

Determining the Value of a Resistor

There are 2 common ways to determine the value of a resistor, and we will cover them both.

Most hobby resistors have color bands on them that help you to determine their resistance value. Reading the bands is like solving a puzzle. Some people enjoy it, some people hate it. You’ll have to give it a try and see where you stand. Don’t worry if you hate it, there are always other ways to figure out what resistance a particular component is.

Lets look at a close up of a resistors color bands.

Focus on the top 5 rows, they are the most important. For now you can ignore green, blue, violet, gray and white. After you get the hang of resistor color codes come back and review the second half of the table.

Lets see some examples to understand how the table works.

It seems that some resistor values show up more often than others. It is very handy to be able to recognize these most common values without having to look them up. Here we will present you with a table of the common values. Notice that we have used some of the higher numbers here. Refer to this table if you need help figuring out a resistors value.

Using an Ohmmeter to Measure Resistors

The multimeter is probably the most used piece of equipment on an electronics bench. Multi implies that the meter has multiple functions. Most multimeters can perform the following functions.

In this guide we are going to use our multimeters in ohmmeter mode, or simply "in ohms".

Here we will show you 3 different multimeters and how to put them in ohmmeter mode.

As you can see, all 3 of these meters have different procedures for putting them in ohmmeter mode. You will have to figure out how your meter works based on these examples. The important things to note are:

How to Hold The Resistor

The correct way to connect a resistor to an ohmmeter is with spring loaded clips, like this. 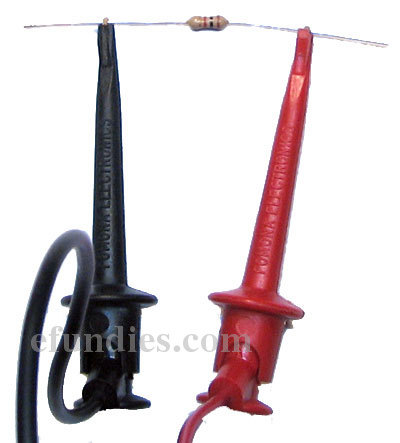 Now we will show the the incorrect way to hold a resistor. Do not do this! 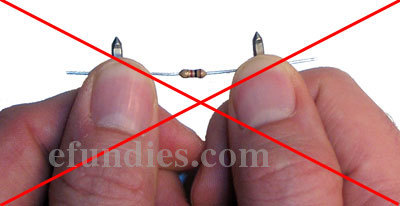 By using your fingers to hold the resistor to the probes you have changed the resistance that you are measuring. You will not get accurate results if you do this. If you do not have spring clips, then set the resistor down on something like a piece of paper or a plastic cutting board and press the probes into it without touching them.

Hooking Up the Meters

Once you get your meter set up correctly, you can clip on to the resistor and get an accurate reading of its value. Here are the above 3 meters measuring the same resistor.

As you can see, all 3 meters are reading a different value. You can not quite make out the bands of the resistor in the picture, but they are:

Using a Resistor to Limit Current

One of the most common uses of a resistor is to limit current flowing into a device. We will use LEDs as an example.

LEDs are rated in how many amps of current you can allow through them before they burn out. By themselves LEDs have virtually no resistance so they will allow huge amounts of current through. However, they will burn up almost immediately if connected to a battery without a current limiting resistor. It is up to you, the system designer, to put the correct resistor inline with the LED to limit the amount of current that the LED receives, because the LED manufacturer has no idea what voltage of battery you are going to use in your project. Lets look at an example using a resistor and an LED.

Above we have shown two different schematics and one real life circuit. Notice that all 3 are electrically identical. This is an example of using a resistor to limit current. In this configuration we call the resistor a current limiting resistor.

Using Ohms Law to Calculate Which Resistor to Use

The real question here is what value of resistor do we need to install to properly limit the amount of current getting to the LED. When we bought the LED, the data that came with it told us that this LED can handle 0.050 amps of current (or 50 milliamps). Using Ohms Law, we know that V = 9 volts and I = 0.050 amps. We can use one of the forms of Ohms Law to calculate R.

Plugging in the values that we know, we get.

Hopefully now you have a better idea of what resistors are and how you can use them in electronics. In this guide you learned how to: